Last week, I published an article and I vowed to write another topic titled WHO WAS ON THE CROSS if the article gets 5000views. Wallahi we are almost there.

Today, permit me to say I have met Jesus. But which Jesus?…lets see

10 And while they looked stedfastly toward heaven as he went up, behold, two men stood by them in white apparel;

11 Which also said, Ye men of Galilee, why stand ye gazing up into heaven? this same Jesus, which is taken up from you into heaven, shall so come in like manner as ye have seen him go into heaven.

A number of times, we find different people giving testimonies about their visions, dreams and life encounters of seeing the Messiah, Jesus son of Mariam. However, we can see that the angels gave us a vivid account of how Jesus would look like if he is seen again. Jesus also explained to us how his body was.

39 Behold my hands and my feet, that it is I myself: handle me, and see; for a spirit hath not flesh and bones, as ye see me have.

This verse alone tells us one thing…Jesus was mortal and he even ate after this discussion. And every mortal that eats, definitely would use the toilet and defecate. Having a perfect knowledge of this, let us now examine the video below.

Did I hear anyone say that was Jesus? Please play back the video and lets see if any picture of Jesus resembled the other? I wonder which Jesus these people are talking about?

Let’s examine some testimonies from  Prof Phillip Wiebe reports on his interviews (conducted about 1990) with 30 people who say they had visions of Jesus In his book Visions of Jesus.

Two visions and a conversion 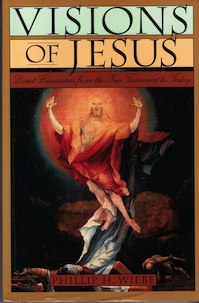 Jim Link had two separate visionary experiences. The first, as an unbeliever, occurred while he was watching TV at home in Ontario Canada one evening, and it seemed like the screen became invisible and a human figure was in the room. The figure didn’t speak, but he beckoned Jim to come to him and Jim immediately thought it was Jesus and remembered his words in the New Testament: Come to me all you who are weak and heavy laden, and I will give you rest. This experience led to him deciding to be a christian. Fifteen years later, while meeting with other christians, he had another vsion, and Jesus questioned him for several hours. The others could hear Jim’s response but saw nothing.

Deby Stamm-Loya had an abusive upbringing from her atheist father and as a teenager ended up using drugs (mostly LSD) and a gang leader. But she became interested in religion and read library books and eventually the Bible, and she “surrendered” to the presence she found there. Much later in life, she felt she needed to know God better, and that night a man she instantly recognised as Jesus stood at the end of her bed and spoke to her at length, re-assuring her that he loved her and she should follow him. Deby felt sure she was awake when this experience began, as she could see out through her bedroom doorway where her parents were sitting, although she later ‘lost natural consciousness’. She was equally adamant that this experience was very different to her drug experiences. Deby was, at the time of writing, completing her doctorate degree in ministry and had founded an organisation helping prison inmates.

When Maureen Haser was 29 years old, married and living in Ontario, she and her husband went on a marriage enrichment weeken. They were having problems, and she felt she could not offer him unconditional love. Alone in her room, Jesus appeared to her, and though he didn’t speak, he communicated that he loved her and wanted to help her, and she felt she understood forgiveness for the first time. Several years later, while lunching with a friend, Jesus sat down in a vacant chair at their restaurant table, wearing Biblical clothes. Nothing was said, and her friend saw nothing, but after he left, Maureen remarked: You’d think he’d wear normal clothes if he’s coming out to lunch. Simultaneously, both had the thought: That is how you recognise me!

Evidence in the snow

This is a very simple story. Henry Hinn was a 19 year old Greek Orthodix christian when he went to pray in a forest close to his home in Ontario. It had only recently snowed. Jesus suddenly appeared to him, and 2.5m away and spoke to him briefly, to encourage him. After he disappeared, Henry noticed that the snow had disappeared where Jesus had stood, and he could stand on the dead grass.

Finally, a story that goes beyond any of the others, which I will report as outlined in the book. Kenneth Logie was the pastor of a Pentecostal church in California in 1954, when Jesus appeared at an evening service and, seen by the 50 people present at the time, walked up to the platform and, after Kenneth fell to the ground spoke to him in another language. Following some other extraordinary events, a 8mm movie camera was purchased. And so, in 1959, when Jesus appeared again, he was seen by about 200 people, and the event was captured on movie film. The film was subsequently shown publicly to about 200 people, including Phillip Wiebe, then an undergraduate. He has since interviewed several people who were present at the viewing, and most agree with him that it records an unusual vision, though some do not remember it well and some believe an actor was used. This is important, because the movie film was subsequently stolen from Kenneth’s home

How believable are these stories?

It is impossible for us to know without doubt the truth or otherwise of these stories, but Phillip Wiebe says that he feels sure the people he interviewed genuinely believed they had seen what they reported. Some may not be true accounts, but it is clear something happened in many of the cases which had a profound influence on the people concerned.

Wiebe goes on to examine the possible explanations, which fall into three categories:

Come to think of it, have we ever asked such people these questions?

Honestly there are lots of questions we need to ask these people claiming to see Jesus and Wallahi from those taht these questions were asked, no 2 accounts are similar as they describe different persons.

Permit me to drop a video were a Christian is recorded trying to disguise as an ex-muslim and claiming to see Jesus. He is the famous Televangelist Mario Joseph. His video is trending online among Christian apologists as they use his words to antagonize Islam. The video below debunks all his claims and should be used by we Muslims to debunk any Christian that shows you his video. Please watch!

Be Grateful to Allah

Sodiq Abdulazeez - Tue 14 Safar 1443AH 21-9-2021AD
0
In the bible, it is elucidated in several places, the legality of side chick (concubine) which is an abomination and a grievous sin in...