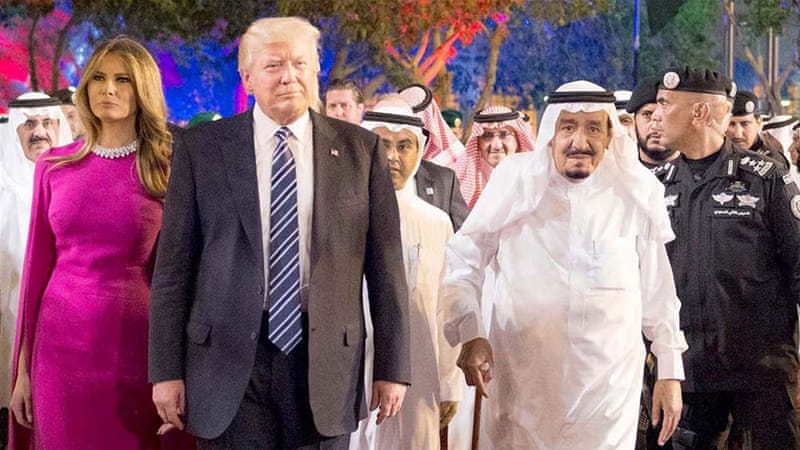 Donald Trump is set to deliver a major speech on Islam during his visit to Saudi Arabia, just two months after he signed revised orders to halt people from six Muslim-majority nations from entering the US.

During a lunch with up to 50 Muslim leaders in Riyadh on Sunday, Trump is expected to express his “hopes for a peaceful vision of Islam”, a day after Washington took issue with Iran.

The speech has been touted as a major event along the lines of a landmark address to the Islamic world given by his predecessor Barack Obama in Cairo in 2009.

It will be especially sensitive given tensions sparked by the Trump administration’s attempted travel ban.

During his campaign, Trump floated the idea of putting mosques in the US under surveillance while calling for a “total shutdown” of Muslims entering the US “until our country’s representatives can figure out what the hell is going on”.

His words shocked many Americans, with Trump’s detractors noting that the US Constitution prohibits religious discrimination.

“I think Islam hates us. There is a tremendous hatred there. We have to get to the bottom of it,” Trump said in a March 2016 interview with CNN.

Sunday’s address comes a day after the US and Saudi Arabia signed agreements worth more than $380bn – almost a third of that military-related.

“That was a tremendous day. Tremendous investments in the United States,” Trump said on Saturday at talks with Saudi King Salman.

Secretary of State Rex Tillerson set the tone on Saturday when he urged Iran’s newly re-elected President Hassan Rouhani to dismantle his country’s “network of terrorism”.

What will he say?

Al Jazeera’s Hashem Ahelbarra, reporting from Riyadh, said Trump would be treading carefully as he addresses the Islamic dignitaries.

“This speech comes against the backdrop of Trump’s Muslim ban, which he has pursued both in his campaign and in his first 100 days as president,” he said.

“His remarks about refugees and Islam were seen as inflammatory, as anti-Islam and anti-Muslim. In his speech, Trump will likely insist on tackling radical ideologies, while staying away from anything that could be interpreted as targeting Islam or the Muslim world.”

“He will meet and have lunch with leaders of more than 50 Muslim countries, where he will deliver an inspiring, direct speech on the need to confront radical ideology and the president’s hopes for a peaceful vision of Islam,” McMaster said ahead of the visit.

A White House official, speaking on condition of anonymity, said the speech would be “uplifting”.

“He’ll talk about what unites us in uplifting terms, but he’ll also be very blunt in talking about the need to confront extremism and the fact that many in the Muslim world have not only not done enough, they’ve actively abetted this extremism, even as some of them have talked a good game on the surface but in quiet, continue to fund extremism.”

Following his election as US president, Trump may chose a path not far removed from those of his predecessors, Obama and George W Bush.

After al-Qaeda claimed the 9/11 attacks on the United States, Bush visited a Washington mosque and said “Islam is peace”, insisting that “the face of terror is not the true faith of Islam”.

And Obama chose Cairo University to deliver a speech detailing his vision of Islam in June 2009.

He addressed the world’s 1.5 billion Muslims with the traditional Arabic greeting “assalam-o-alaikum”, and went on to call for “this cycle of suspicion and discord” to end.

Trump, who next travels to Israel and the Palestinian territories before visiting The Vatican, Brussels and Italy for NATO and G7 meetings, is looking to leave his domestic troubles behind.

ONLY ISLAM GIVES THE RESPECT

Law firm hired by Qatar to probe violations from blockade

Bashir Lucas Samson Lukman - Sat 7 Shawwal 1438AH 1-7-2017AD
0
Lalive will pursue the cases of some 2,450 citizens and foreign residents hit by the anti-Qatar measures. Barbara Bibbo Qatari officials meet with lawyers from the...