Draft legislation seeks to give English-speakers priority for US residency and to halve the number of legal immigrants. 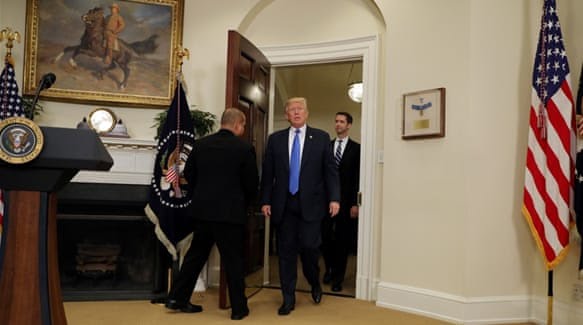 US President Donald Trump on Wednesday threw his weight behind efforts to give English-speakers priority for US residency cards and halving the number of legal migrants admitted to the country.

Trump backed proposals that would reform the process of obtaining a US “green card” by introducing a points-based system favouring skilled anglophone workers.

Around one million immigrants are granted permanent residency each year, but the draft legislation – presented at the White House by Trump and two senators who crafted it – aims to cut that number by around 50 percent.

The bill would also eliminate the preference for US residents’ extended and adult family members, while maintaining priority for their spouses and minor children.

It would also put a cap on the number of refugees able to gain permanent residency at 50,000 a year.

OPINION: How Trump’s immigration policies could cost the economy

Trump hailed what he described as “the most significant reform to our immigration system in half a century”.

The legislation has only a slim chance of passing in congress.

It brought almost immediate rejection from influential South Carolina Senator Lindsey Graham, who said he favoured a merit-based system but said this proposal would have a “devastating” impact on his state’s economy.

But Trump’s endorsement gave the White House an opportunity to show the president’s base supporters that he is trying to live up to his hardline promises.

Standing in the White House’s Roosevelt Room flanked by Senators Tom Cotton and David Perdue, Trump said that the United States had admitted too many low-skilled workers and claimed they were taking jobs from Americans.

“This policy has placed pressure on American workers, taxpayers and community resources,” he said. “It has not been fair to our people, to our citizens, to our workers.”

He pointed to the benefits of a Canadian or Australian-style points-based system.

Al Jazeera’s Heidi Zhou-Castro, reporting from Washington DC, said that many critics see Trump’s bill as representing a fundamental change in America’s self-ascribed philosophy of being a “melting pot” of cultures and nationalities.

“The words etched before the statue of liberty famously say: ‘send me your tired, your poor, your huddled masses’, and most opponents of this bill look at it and say it’s trying to re-write those words to say ‘give me your rich, your English-speaking, your highly-educated’,” she said.

“And although for Trump’s base those are encouraging words, for much of the rest of the country it does sound quite a bit off.”

“This competitive application process will favour applicants who can speak English, financially support themselves and their families and demonstrate skills that will contribute to our economy,” he said.

Trump said the new system, if approved, would “help ensure that newcomers to our wonderful country will be assimilated, will succeed and achieve the American dream,” while also protecting “struggling American families.”

Critics say that the proposals would actually result in falling wages, by slashing the number of migrants creating jobs.

The National Academy of Sciences studied two decades of data and found the impact of immigration on the wages of American-born workers to be “very small”.

The academy also concluded that “immigration has an overall positive impact on long-run economic growth in the US,” although first-generation immigrants do place more of a burden on state resources.

But Trump’s message is likely to resonate strongly with low-skilled white workers who have seen wages stagnate and believe their long-held cultural dominance is being eroded.

Trump has made tackling illegal immigration from Latin America a key plank of his presidential campaign.

Cotton first introduced the proposals in February to the Senate, where they have been stalled ever since.

“Its provisions reflect the shameful agenda of nativists and white nationalists who fear the growing diversity of our country,” the group said in a statement.

Al Jazeera’s Zhou-Castro said that – even though the bill unlikely to pass through congress – it is not a surprise that Trump would pick immigration as the next topic on which to expend political capital as it galvanised his base.

“This is a time when the White House has dealt with the Russia scandal, and a devastating healthcare [bill] loss, and it is in desperate need of a win,” she said.

“So it remains to be seen how far Trump will go in pushing this immigration policy.”