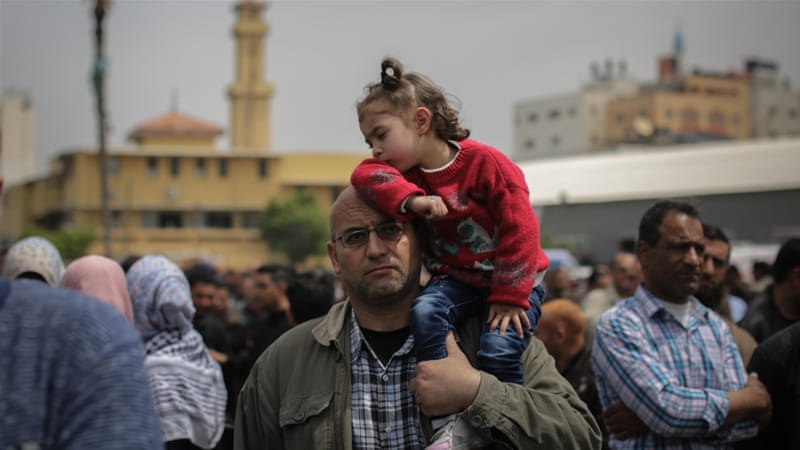 The new pay cuts, targeting employees of the Palestinian Authority in Gaza, will increase the hardships for many in the strip [Ezz Zanoun]

Gaza – Maysoon Abu Jumaa, 38, was extremely shocked when she received her paycheck for March. The Gaza-based science teacher regularly makes about $700 dollars in monthly wages. Last month, she received $70.

Abu Jumaa is one of tens of thousands of employees for the Palestinian Authority (PA) living in the besieged Gaza Strip , adversely affected by a decision that drastically reduced their salaries.

“I am a mother of six orphans, and now I fear that my little children will be without food,” Abu Jumaa told Al Jazeera as her voice trembled.

The decision came into effect last week, when the public sector workers for the PA received their March salaries with between 30-70 percent in deductions, leading to the eruption of large rallies in the impoverished coastal enclave.

The PA, a semi-governmental body that administers the Israeli-occupied West Bank , has been at loggerheads with the Hamas movement that governs the Gaza Strip since the latter seized control of the strip in 2007 following its victory in elections.

After Hamas, the Gaza-based resistance movement, seized power, the PA instructed its employees in Gaza not to attend work under Hamas rule. Those who decided not to attend work, were still kept on the PA payroll. But many others continued with their jobs, after a religious decree in Gaza stipulated it was wrong to accept money if it is not being earned.

Abu Jumaa, who teaches at a secondary public school in Rafah, a city in southern Gaza, has been placed in a serious financial peril as a result of the cuts. She is completely helpless, faced with increasing familial responsibilities. “This is unjust, how am I going to pay for tuitions and other necessities, like the medicine for my little son who suffers from epilepsy?” she continued.

Some 70,000 PA civil servants already struggle from meagre and irregular wages, in the midst of costly living standards. Now, they are at risk of poverty.

The Gaza Strip has suffered abominable economic conditions since the area was placed under a blockade by Israel more than 10 years ago. About 40 percent of the two million population live below the poverty line, while at least 80 percent of the population would starve without food from international aid agencies.

In 2015, the United Nations warned that Gaza could become “uninhabitable” by 2020 if the same economic trends persist.

Sanaa Ghaith, another teacher in Rafah, who supports 11 family members, received just $50 in salary last month. “Our sense of stability is dwindling in this city, people have become worn out,” Ghaith told Al Jazeera.

“As a mother, how I would have the words to tell my three daughters that I cannot pay for their universities and colleges?” Ghaith told Al Jazeera.

The crisis in salaries is very likely to aggravate the situation and increase suffering in the poverty-stricken Strip.

A spokesperson for the PA said the crippling financial blockade imposed on the Palestinian state and internal divisions are responsible for the salary cuts in the Gaza Strip.

“The international support offered to the Palestinian Authority has severely decreased in recent years, eventually leading to a deepening financial crisis. The most prominent side of it is the non-payment salaries and cuts in bonuses and allowances to our workers in the Gaza Strip,” Yousef al-Mahmoud said in a statement.

Hamas decried what it described as an “arbitrary and irresponsible decision” that aims to weaken people’s steadfastness in the isolated and blockaded strip of land.

A senior Hamas official, Yahia Moussa, told Al Jazeera that Hamas refuses the PA’s pretexts to absolve itself from the decision.

“If the PA’s claims of facing financial trouble are true, then why are they implementing those cuts and other austerity measures on the people of Gaza only?” Mousa pointed out, echoing questions in the strip as to why it was only PA employees in Gaza, and not those in the West Bank, that were targeted by the cuts.

“These practices are a manifested continuation of the PA’s biased policy against the Palestinian people in Gaza that aims to further enhance the disconnect between Gaza and the occupied West Bank.”

A handful of angry protesters threatened to launch a hunger strike to put the PA and its president, Mahmoud Abbas, under pressure to immediately retract their latest controversial decision.

Tarek Dadeh was one of these protesters. “We are falling victims to the dirty game they’re playing against each other. They [both PA and Hamas] have to halt this farce and stop blackmailing their people and sabotaging their already faltering livelihoods,” Dadeh told Al Jazeera.

He called on Abbas to intervene and reverse the discriminatory and punitive measure that is being carried out against the Palestinian people in Gaza. “They are lying; they have the money to pay us the salaries. They collect the tax revenues and receive financial aid from the European Union, why not give us our rights?” added Dadeh.

Dadeh, along with many other PA workers, are under threat of losing their homes if they fail to pay rent. He must also look for new creditors to help him cover his medical costs for his wife, who suffers from diabetes. For now, all he can do is protest.

Meanwhile, the effect of the salary crisis has been conspicuous throughout the local markets of Gaza as the purchasing power sharply decreased and many of stores are devoid of customers.

Omar Shaban, an economic commentator in Gaza, said that the local economy in Gaza is already dying and crippled, but the situation will get worse if the crisis remained unresolved.

“The stagnant economy in Gaza needs to be stimulated with movement in the markets, but with no salaries, the workers will not pay back their debts for the store owners and everyone will be in hot water,” Shaban told Al Jazeera.

Another Gaza-based analyst, Ibrahim el-Madhoun told Al Jazeera that the PA continues with its unabated policy of dodging its responsibilities towards the Gaza Strip that is ruled by Fatah’s rival, Hamas, to accumulate and double the enclave’s economic and social hardships and put it on verge of collapse.

“The PA’s latest move represents unprecedented indifference towards Gaza, including the PA’s workers who are repeatedly failed and disappointed by their leadership,” el-Madhoun said.

“The PA even seems not to care about its debilitating public support in Gaza and this will lead to further enforcement of the internal Palestinian split.”

Silence during Fitnah is Golden A response to ‘Saudi Is a Holy Land – What's My Own with Qatar?!