The Muslim community in Port Harcourt, Rivers State have been thrown into mourning following what they called “premeditated attacks” on their members by mobs suspected to be members of Indigenous People of Biafra, IPOB.

Muslim News findings revealed that no fewer than ten Muslims have lost their lives while several others sustained various degrees of injuries during the attacks that rocked places such as Oil Mill Market, Rumukushi, Oyigbo, Eleme, among others, between Tuesday and Wednesday, October 20-21.

The son of the Seriki Hausa community at Eleme, Alhaji Attahiru Shittu was among three victims allegedly burnt beyond recognition by the outlawed terrorist group.

The IPOB attacks was a fallout of the #EndSARS protests which went violent in many parts of the country, including Abuja and Lagos.

The Nigerian Muslims have since blamed the mainstream media for not giving the series of mortal attacks on their brethren befitting coverage on their respective media, the same way they would have done, if it were to be members of other tribal and religious persuasions.

Confirming the incident to Muslim News on Saturday, Alhaji Akilu Muhammad, the Imam of Trailer park Central Mosque said they have lost ten members, including the son of the Seriki Hausa community, who was burnt beyond recognition.

According to him, During the EndSARS protests, we began to receive distress calls from our brothers in Oyigbo and some parts of Oil Mill market, Eleme, Rumukushi, Mile 1, up to Diobu where so many Muslims reside. They were attacked by IPOB members who were also calling for #EndSARS.

“However, the attacks were resisted in some areas but in a place like Eleme junction and Oyigbo, the IPOB members attacked in large numbers and they were able to kill our fellow Muslims and burned some of their wares worth several millions.

“We were able to bury six people on Friday, because we couldn’t locate their dead bodies (corpses) until Thursday night, when the Imam of Oil Mill market told me they have recovered 3 dead bodies (corpses). One of them was identified as the son of our Seriki. He was a mechanic and went to Rumuokoro to repair a truck. On his way back, he was attacked and burnt to marshes, beyond recognition.

Imam Akilu told our correspondent on Saturday that the Muslim community had just received the news of four Muslims who were reportedly killed during the attacks, adding that plans are underway to give them a befitting burial today or Sunday, October 25, in accordance with Islamic right.

He said, “As at today, Saturday, we lost 10 Muslims. Yes, one person was discharged yesterday, but there are other victims receiving treatments at different hospitals. We have all the names of our brethren who were killed but we’ll get them to your medium after their burial is completed.”

Muslim News investigations revealed that the victims were targeted by the dangerous group because of their religion, Islam. 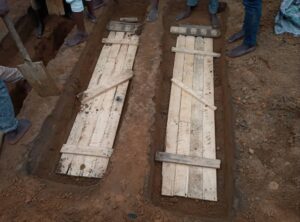 There have been coordinated and continuous attacks on Igbo Muslims and the Hausa community in the South-South and South-East, the regions predominantly populated by Christians.

The Imam of Trailer park Central Mosque said the #EndSARS protest was used as a cover to orchestrate coordinated attacks on Igbo speaking and Northern Nigeria Muslims who reside in Port Harcourt and other places in South-South and South-East.

The Muslim community commended the Rivers State Governor, Mr. Nyesom Wike and the Commissioner of Police, Mr. Joseph Mukan, for identifying with them in the face of these challenges.

According to him, “We thank the Governor and then, the Commissioner of Police for their support. They gave us three patrol vehicles that escorted us to the cemetery. We got another information about the four boys who were about to be killed by members of the terrorist group, the police accompanied us and we were able to rescue them. The IPOB members mounted roadblocks but the police opened fire to disperse them.

“We thank the Local Government Chairman of Eleme, Hon Okwaraji. He is a wonderful man. We appreciate the support of all the leaders in the community who also tried their best possible to protect us and our property. I enjoin them and other good people of Rivers to protect their land from this ‘element’ called IPOB.”

Imam Akilu called on the Muslims to be calm and remain law abiding, saying that Islam is a religion of peace and do not allow reprisal, even though our properties have been destroyed.

“About 2,000 residents who have turned internally displaced persons at Oil Mill Kara (Cattle Market) and those injured are in dire need of our help and assistance. Let’s do what we can to support them,” he added.

We Called Apostle Ubeini, Says We Turn Water To Blood of Jesus Against Coronavirus (Audio)

Bashir Lucas Samson Lukman - Sat 10 Muharram 1442AH 29-8-2020AD
0
Daily Trust, a Nigerian Newspaper has issued an apology over a featured image in one of its reports on Friday. The report which read, "Gunmen...