A wall collapsed at Demba Diop stadium in Dakar as police fired tear gas at both sets of supporters after the game. 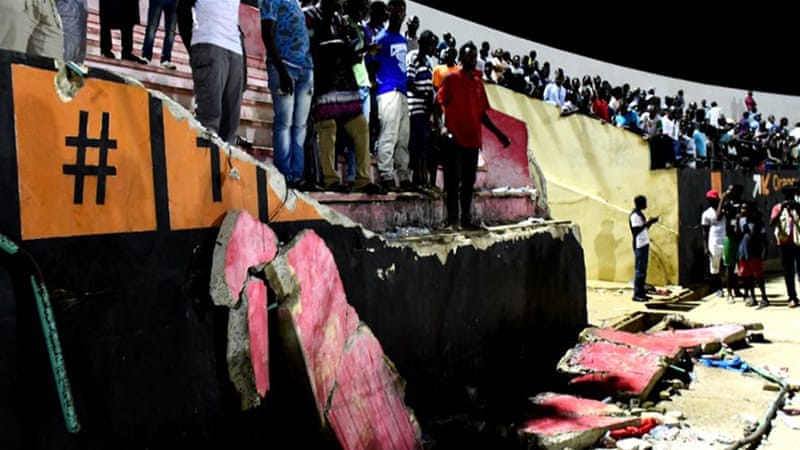 Eight people have been killed during a Senegal football league final in Dakar in a stampede that broke out following clashes at the end of the match, the official APS news agency said.

A wall collapsed at Demba Diop stadium on Saturday as people prepared to leave after the game between local teams Ouakam and Stade de Mbour, APS reported, adding many more were injured.

Police fired tear gas at clashing supporters from both teams who were throwing projectiles, and panic spread in the stadium leading to a crush.

Sports minister Matar Ba said a young girl was among the dead, while around 60 injured fans had been taken to health facilities in Dakar.

He vowed “strong measures so that such an event will never be repeated in Senegal”.

At 2-1 during extra time, US Ouakam supporters began throwing stones at Stade de Mbour fans, causing spectators to begin vacating their seats in a rush, an AFP news agency journalist at the scene said.

Part of a wall supporting bleachers seating fans from both sides then collapsed as police started firing tear gas.

“All of a sudden, the wall fell. We knew some of our own had lost their lives because the wall fell directly onto people,” said Cheikh Maba Diop, a witness who helped evacuate victims from the stadium and lost a friend in the tragedy.

Campaigning for Senegal’s legislative elections due on July 30 would be suspended on Sunday in respect for the victims, said a spokesman for President Macky Sall.

Senegal’s safety record at large gatherings has been heavily criticised this year after the death of dozens of people at a religious retreat in April when a fire ripped through makeshift shelters.

Amasa Firdaus: “They Try To Suppress Us At The Law School” Says Muslim Attorney…”Controversy On Hijab Is Needless” -NBA President…Plus More

Bashir Lucas Samson Lukman - Fri 21 Safar 1439AH 10-11-2017AD
0
OF MYTH AND SUPERSTITION 'Emberphobia - Bashir LuCas Samson Lukman The society we live in is filled with superstitious beliefs, myths, fables that are taken so...