Daily Trust, a Nigerian Newspaper published a news on Friday night with the headline, “Gunmen Kill Two in Kaduna Community”.

However, the picture of two men wearing Hijab, a piece of clothing worn by Muslim women was set as the featured image. Reading the report, no part of it suggests that the gunmen wore hijab.

This attempt to Islamize a crime report hurts the sensitivity of the overwhelming number of Muslims. What! Hijab? Allah’s ordained attire for Muslim women? Sadly, there is no where in the story where the gunmen were reported to have been dressed in Hijab to commit the crime. Why did the newspaper then use Hijab? This isn’t only unethical but insulting to the sensibilities of the over 1.8 billion Muslims. The editorial board of the newspaper should immediately drop the featured image attached to the story immediately and apologise for this Islamophobic and unprofessional conduct.”

Lots of reactions have followed the report on Facebook; 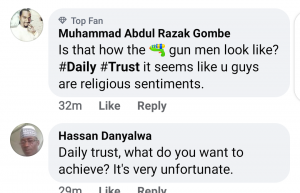 Consequent upon the report, some people who read the news have had a dangerous interpretation of the news which was, at it seems, the intent of adding the featured image to the report…

We maintain that this featured image is an insult to Muslims in Nigeria and a very unprofessional and unethical journalism. We demand that the Daily Trust remove this image to show respect to the Muslims and to distance themselves from sensationalism or Yellow Journalism.