MANCHESTER BLAST: WHAT WE KNOW

UK police say they have arrested a 23-year old man in connection with a suicide bomb attack in Manchester which killed 23 people, including the attacker, and wounded dozens at a concert by US pop singer Ariana Grande.

“With regards to last night’s incident at the Manchester Arena, we can confirm we have arrested a 23-year-old man in South Manchester,” Greater Manchester Police said on Twitter on Tuesday.

An improvised explosive device went off late on Monday as thousands of – mostly young – fans streamed out of Manchester Arena in the northern English city at the end of Grande’s performance, police said.

The Islamic State of Iraq and the Levant (ISIL, also known as ISIS) armed group  through its social media channels, claimed responsibility for the attack, saying “one of the caliphate’s soldiers placed bombs among the crowds”. 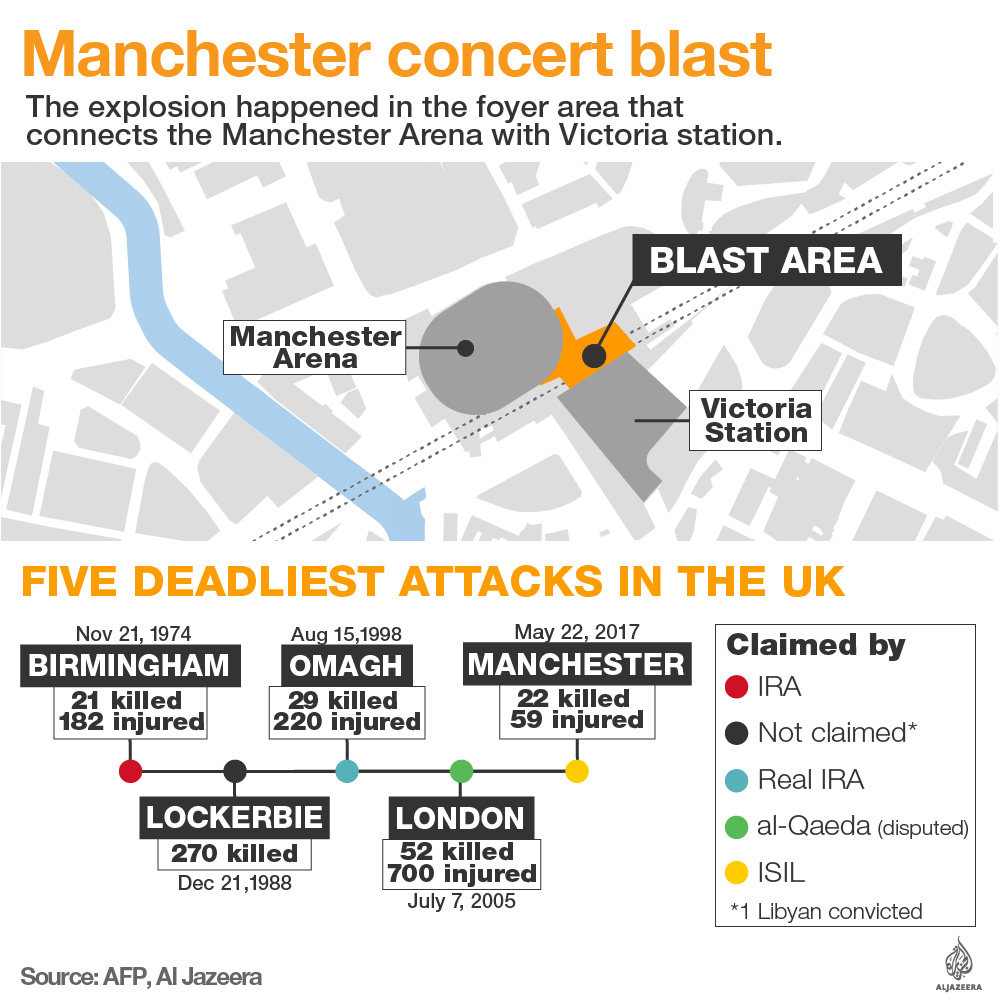 The deadly explosion, which caused scenes of chaos and panic, sending screaming families and children fleeing, also wounded at least 59 concert-goers, many of whom are in critical condition.

Al Jazeera’s Nadim Baba, reporting from Manchester, said that at least 12 of the 59 victims brought to hospitals were children.

At least one of the fatalities was an eight-year-old child, our correspondent also reported, describing the “severe security threat” the country faces.

The news of the arrest came minutes after British Prime Minister Theresa May said police knew the identity of the suspected suicide bomber – but could not yet announce the attacker’s name.

Speaking after an emergency meeting of the country’s top security committee, May condemned what she called a “callous terrorist attack”, calling it “among the worst terrorism we have experienced in the United Kingdom”.

She also repeated an earlier police statement which said that the attacker had carried out the attack alone. Yet, it was not yet clear if others had helped in the preparation.

The attack has been described as the deadliest in Britain since four men killed 52 people in suicide bombings on London’s transport system in July 2005.

Ian Hopkins,chief constable for Great Manchester, said the explosion was caused by one man “carrying an improvised explosive device, which he detonated”, Hopkins told reporters on Tuesday morning.

Speaking to Al Jazeera, Martin Reardon, a security analyst and former FBI agent, said that as ISIL loses ground in the Middle East, fighters are likely to stage more attacks in Europe.

The attack came ahead of a June 8 general election in the UK.

Earlier on Tuesday, UK politicians said they were suspending election campaigning until further notice following the events in Manchester.

Police responded to reports of an explosion shortly after 10:35pm (21:35 GMT) at the arena, which has the capacity to hold 21,000 people, where Grande had been performing to an audience that included many children.

READ MORE: The legacy of the 7/7 London bombings

Police cars, bomb-disposal units and 60 ambulances raced to the scene. A video posted on Twitter showed fans screaming and running out of the venue.

“A huge bomb-like bang went off that hugely panicked everyone and we were all trying to flee the arena,” concert-goer Majid Khan, 22, told Britain’s Press Association.

Catherine Macfarlane told the Reuters news agency the blast hit after the concert was over.

“We were making our way out and when we were right by the door there was a massive explosion and everybody was screaming,” Macfarlane said.

“It was a huge explosion – you could feel it in your chest. It was chaotic. Everybody was running and screaming and just trying to get out.”

“The incident took place outside the venue in a public space,” police said. “Our thoughts and prayers go out to the victims.”

The local ambulance service said on Twitter it had taken 59 casualties from the incident and treated “a number of walking wounded on scene”.

A “precautionary controlled explosion” was carried out near the venue on a package that was believed to be a suspect device, but turned out to be “abandoned clothing, not a suspicious item”.

Manchester Arena, which opened in 1995, is the largest indoor arena in Europe, according to its website.

A spokesman for Ariana Grande’s record label said the singer was “okay”. The concert was part of Grande’s The Dangerous Woman Tour.

Grande tweeted that she was “broken” after the incident.

Paula Robinson, 48, was at the train station next to the arena with her husband when she felt the explosion and saw dozens of teenage girls screaming and running away from the arena.

Robinson took several of them to the nearby Holiday Inn Express hotel and tweeted out her phone number to worried parents telling them to meet her there. She said her phone has not stopped ringing since her tweet.

“Parents were frantic running about trying to get to their children,” she said.

Corbyn said Tuesday he is “horrified” by the events in Manchester and that his thoughts are with the families and friends of those who have died and been injured.

COULD THAT BE HIJAB? By Sanni Kay Yusuf