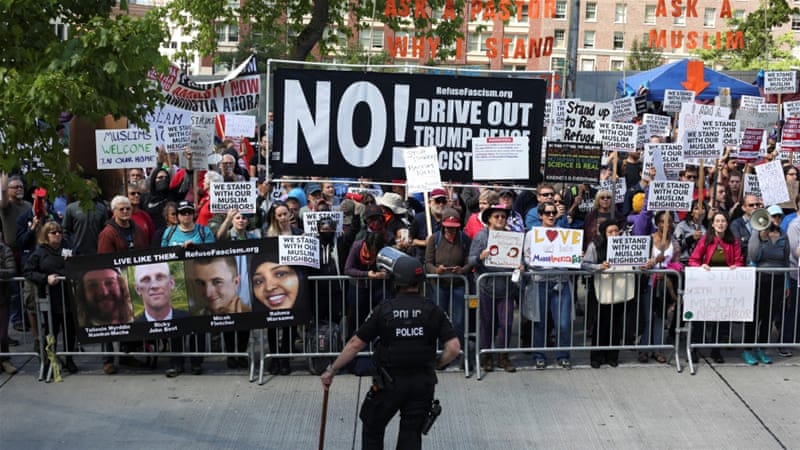 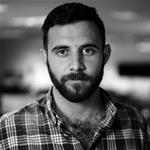 When the anti-Muslim ACT for America lobbying group called for nationwide protests against Islamic law, anti-racists and anti-fascists wasted little time in mobilising.

In cities and towns across the country, counterprotesters outnumbered participants in the National March Against Sharia, which ACT for America said it had called for in response to alleged attempts to implement sharia – or Islamic law – in the United States.

The Council on American-Islamic Relations (CAIR) told US media outlets that the anti-Muslim marches were “a bust”.

In many places, the anti-Muslim marches were shut down or blocked from their routes, while anti-fascist protesters, known colloquially as Antifa, confronted and clashed with them in others.

The Southern Poverty Law Center describes ACT for America as an “extremist” organisation and the largest grassroots anti-Muslim group in the US.

ACT for America did not reply to Al Jazeera’s request for a comment.

A statement on the group’s website claimed the marches were not intended to target Muslims but to express the view that sharia law violates the US constitution and human rights.

Yet rights groups and watchdogs accused the group of inciting racism and xenophobia at a time when the country is gripped by tensions.

The marches came just weeks after a 35-year-old white supremacist, Jeremy Christian, allegedly stabbed to death Ricky Best, 53, and Taliesin Namkai-Meche, 23, when they tried to stop him from harassing a pair of girls, one of whom was wearing a hijab, on a light rail in Portland, Oregon.

A third man, 21-year-old Micah Fletcher, was severely injured when he intervened.

Groups and organisations within the alt-right – a loosely knit movement including white nationalists, white supremacists and neo-Nazis – participated in the National March Against Sharia.

In a handful of cities, the far-right men’s organisation Proud Boys and the anti-government militia group Oath Keepers joined the anti-Muslim marches.

In a statement published before the National March Against Sharia, the Refuse Fascism activist group called for counterprotests against the “hateful rallies”.

“The bottom line: these people are fascists,” the statement said. “They will not go away if ignored; they must be confronted and their programme must be defeated.”

Confrontations took place between the anti-fascist left and the alt-right and its allies at the marches.

Recent months have seen increased protests and clashes between the two groups, with anti-fascists mobilising against far-right speakers and political figures in an effort to deny them a platform.

In Seattle, Washington, brawls broke out between ACT for America supporters and anti-fascists. Police used pepper spray to break up the confrontations.

In Santa Clara, California, a diverse group of more than a thousand counterprotesters outnumbered the National March Against Sharia participants 20-to-one, according to CAIR.

In front of the capitol building in Denver, Colorado, police surrounded the two opposing sides, who hurled insults at one another.

Activists from the Northern Colorado Antifa Collective accused the police of effectively choosing sides by using force against the counterprotests.

“When the white supremacists decided they wanted to leave, the police essentially gave them an escort,” Freud, who declined to provide a surname for fear of exposure by far-rightists, told Al Jazeera by email.

The anti-fascists and other counterprotesters attempted to confront the marchers, but police officers dressed in riot gear quickly moved in. “I was hit in the neck and shoulder by police as they cleared the area, as were others,” Freud said.

“The ultimate goal [was] to show solidarity, display our outrage, and, hopefully, deny the Islamophobic crowd a platform to spew their hate speech against the Muslim community.”

In Syracuse, New York, around 100 black-clad anarchists, socialists and other counterprotesters showed up at the local march and shouted at the ACT organisers as they tried to give speeches, local media reported. “No Trump, no KKK, no fascist USA,” they hollered. “Muslims are welcome here.”

In Austin, Texas, counterprotesters outnumbered their anti-Muslim counterparts outside the statehouse. Rows of police officers separated the two sides. By the end of the day, participants were unable to embark on their march and many were chased off by anti-fascists.

Citing a spate of attacks targeting Muslims, a statement published on It’s Going Down, an anarchist news site, called for counterprotesters to resist “anti-Muslim terror” and to reject “the racist scapegoating of immigrants, refugees and all Muslim people”.

In New York City, the Metropolitan Anarchist Coordinating Council (MACC) and other groups staged a noise rally in an attempt to drown out the National March Against Sharia participants’ speeches and chants.

In a press release, MACC said the counterprotest was the first action in a new campaign called “No Platform for Fascism”.

“These are not just words; they’re actions,” Marisa Holmes, a spokesperson for MACC, told Al Jazeera by telephone before Saturday’s marches. “They need to be confronted both on a discursive level and in the streets.”

She added: “That’s why, from Berkeley to New York to Portland, we’re seeing more anti-fascist groups and coalitions form.”

The ACT for America supporters chanted back: “Commie scum, off our streets.” Others yelled: “One people, one nation, end immigration.”

Proud Boys leader Gavin McInnes, who cofounded Vice Media and left the outlet in 2008, delivered a tirade against Muslims and feminism, mocking rape victims in one part.

ACT for America was founded in 2007 and is part of a pre-existing network of anti-Muslim organisations that CAIR calls the “Islamophobia industry”. Yet rights groups and activists have expressed concern about the coordination between anti-Muslim groups and recently energised far-right movements such as the alt-right.

“What we’re seeing emerging is a more open connection between white supremacists, neo-Nazis and the Islamphobia movement,” Corey Saylor, director of CAIR’s Department to Monitor and Combat Islamophobia, told Al Jazeera. “They believe every practising Muslim is a radical Muslim, that everyone is a threat,” he added.

READ MORE: How US groups spread hate via the Islamophobia industry

Claiming to have more than 500,000 members, the group is one of many that support US President Donald Trump. Its members have campaigned for strict legislation that targets Muslims and refugees in recent years.

In an executive order that has been frozen by courts, Trump has attempted to ban travellers from six Muslim-majority countries from entering the US. The order is set to be considered by the Supreme Court.

Brigitte Gabriel, ACT for America’s founder, is a Lebanese American who has in the past accused the Muslim Brotherhood political movement of conspiring to conquer the US. She has also referred to Arabs as “barbarians” and claimed they have “no soul”.

Alia Salem, a Dallas-based Muslim-American and social justice activist, described the relationship between these groups as “more an unveiling rather than a convergence.

“It has the same white supremacist thread running throughout all of it,” she told Al Jazeera by telephone. “I’ve never met a person who is pro-immigration and anti-Muslim, for instance.”

Explaining that the election of President Donald Trump has “emboldened” the far-right and anti-Muslim groups, Salem said it has also sparked massive resistance.

“That’s why you see Latinos, Jews, Muslims, African-Americans and other people who have been marginalised starting to come together and resist what’s happening,” she said.

Al-Bayrooni: The linguist and multitalented scientist

The Bible led me to Islam continued-page 31-34

Bashir Lucas Samson Lukman - Wed 15 Shaban 1441AH 8-4-2020AD
0
Last Wednesday, a French doctor caused controversy when he proposed that vaccines for the COVID-19 pandemic be tried on Africans because they lack masks and other...