US president phasing out agency’s programme to arm and train groups in order to get closer to Russia, say US officials. 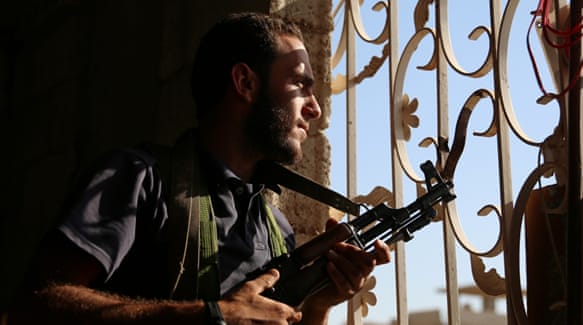 The Washington Post was first to report the programme’s suspension on Wednesday.

The US decision, said one of the officials, is part of an effort by the administration to improve relations with Russia, which along with Iranian-supported groups has largely succeeded in preserving Assad’s government in the six-year-civil war.

The CIA programme began in 2013 as part of efforts by the administration of then-President Barack Obama to overthrow Assad, but produced little success, said the officials, both of whom are familiar with the programme and spoke on the condition of anonymity.

White House spokeswoman Sarah Sanders declined to comment on the topic at the White House briefing.

The decision was made nearly a month ago with National Security Adviser H.R. McMaster and CIA Director Mike Pompeo after they consulted with lower ranking officials and before Trump’s July 7 meeting with Russian President Vladimir Putin at the G20 summit in Germany. It was not part of US-Russian negotiations on a ceasefire in southwestern Syria, the two officials said.

A bid to ‘improve Russia ties’

One of the officials said the US was not making a major concession, given Assad’s grip on power, although not on all of Syria, “but it’s a signal to Putin that the administration wants to improve ties to Russia”.

Al Jazeera’s Heidi Zhou-Castro, reporting from Washington, DC, said the efficacy of the CIA programme to support “moderate” rebels fighting Assad has come under question since Russia’s intevention in 2015 to support Assad.

“But even at its inception, this programme was considered to be miniscule – it would only arm a few hundred Syrian rebel fighters a month,” she said.

“And then in 2015 when Russia entered the conflict, throwing its oversized military weight behind Assad … the CIA programme’s perceived impact diminshed to nearly inconsequential.

“But the US held on to it, apparently in an effort to maintain it as a bargaining tool in future negotiations with Russia.”

Juan Cole, history professor at the University of Michigan, told Al Jazeera that the groups the CIA was training and arming are small and have largely been defeated.

“So they’re not much of a bargaining chip if that’s what they were being held for,” he said.

The move to phase out the programme comes as Trump is under intense scrutiny by Congress and a special counsel investigating Russian interference in the 2016 presidential election.

Russia has denied US intelligence agencies’ allegations of Moscow meddling, and Trump has denied collusion between his campaign and Russians.

“The bigger picture is that these developments are troubling because they’re indicators of Trump’s desire to get closer to Putin,” said Al Jazeera’s Zhou-Castro.

“Analysts have called this behaviour ‘bizarre’ given that they are leaders of two world powers that are so much at odds and of course, lest we forget, there are those investigations in the US,” she said.

A downside of the CIA programme, one of the officials said, is that some armed and trained rebels defected to the Islamic State of Iraq and the Levant (ISIL, also known as ISIS) and other armed groups.

Some members of the previous Obama administration favoured abandoning the programme.

The decision came as the US and Russia negotiated a ceasefire in southwest Syria, covering some of the area from which the rebels operated.

Support for the programme further eroded last year after the rebels lost the areas they held in the Syrian city of Aleppo under a brutal Russian-backed government assault.

Before assuming office in January, Trump suggested he could end support for Free Syrian Army groups and give priority to the fight against ISIL.

A separate effort by the US military effort to train, arm and support other Syrian rebel groups with air strikes and other actions will continue, the officials said.

However, aside from air strikes after the Syrian military launched a chemical weapons attack, the Trump administration has not increased military support from the limits set by the Obama administration.

Cole told Al Jazeera the US under Trump has increasingly few interests in Syria – its main focus is on defeating ISIL, which includes supporting the Kurdish-led SDF.

“But I would be very surprised if [Trump] has the stamina or the interest in Syria to put down a marker for a long-term US presence there,” said Cole.

“How does phasing out the CIA programme serve US interests in Syria? And how – if at all – does it serve Trump’s personal interest?”

Horror! Another country within Nigeria. Abule Munwonleru: A camp for enslavement under the guise of Christianity