As the Syrian conflict enters its seventh year, more than 465,000 Syrians have been killed in the fighting, more than a million injured and over 12 million Syrians – half the country’s prewar population – have been displaced from their homes.

That March, peaceful protests erupted in Syria as well, after 15 boys were detained and tortured for having written graffiti in support of the Arab Spring. One of the boys, 13-year-old Hamza al-Khateeb, was killed after having been brutally tortured.

The Syrian government, led by President Bashar al-Assad, responded to the protests by killing hundreds of demonstrators and imprisoning many more. In July 2011, defectors from the military announced the formation of the Free Syrian Army, a rebel group aiming to overthrow the government, and Syria began to slide into civil war. 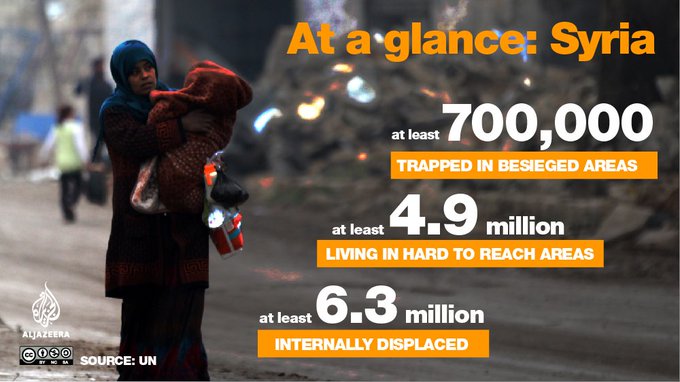 What caused the uprising?

Initially, lack of freedoms and economic woes fuelled resentment of the Syrian government, and public anger was inflamed by the harsh crackdown on protesters. Successful uprisings in Tunisia and Egypt energised and gave hope to Syrian pro-democracy activists. Many Islamist movements were also strongly opposed to the Assads’ rule.

In 1982, Bashar’s father, Hafez al-Assad, ordered a military crackdown on the Muslim Brotherhood in Hama, which killed between 10,000-40,000 people and flattened much of the city.

Although the initial protests in 2011 were mostly non-sectarian, armed conflict led to the emergence of starker sectarian divisions. Minority religious groups tend to support the Assad government, while the overwhelming majority of opposition fighters are Sunni Muslims.

Most Syrians are Sunni Muslims, but Syria’s security establishment has long been dominated by members of the Alawite sect, of which Assad is a member.

The sectarian split is reflected among regional actors’ stances as well.

Even global warming has been claimed to have played a role in sparking the 2011 uprising. A severe drought plagued Syria from 2007-10, spurring as many as 1.5 million people to migrate from the countryside into cities, which exacerbated poverty and social unrest.

Foreign backing and open intervention have played a large role in Syria’s civil war. An international coalition led by the United States has bombed targets of the Islamic State of Iraq and the Levant (ISIL, also known as ISIS) group since 2014.

The US has repeatedly stated its opposition to the Assad government, but has hesitated to involve itself deeply in the conflict, even after the Assad government allegedly used chemical weapons in 2013, which former US President Barack Obama had referred to as a “red line” that would prompt intervention.

On April 7, the US carried its first direct military action against Assad’s forces, launching59 Tomahawk cruise missiles at a Syrian air force base from which US officials believe a chemical attack in Khan Sheikhoun had been launched.

The White House spokesman said: [Trump] “made it very clear that if those actions were to continue, further action will definitely be considered by the United States.”

In October 2015, the US scrapped its controversial programme to train Syrian rebels, after it was revealed that it had spent $500m but only trained 60 fighters.

In February 2017, the CIA froze funding and logistical support for rebel factions in northern Syria but according to Free Syrian Army (FSA) sources, the funding was restored to a certain extent by late March.

Russia launched in, September 2015, a bombing campaign against what it referred to as “terrorist groups” in Syria, which included ISIL as well as rebel groups backed by western states. Russia has also deployed military advisers to shore up Assad’s defences.

Several Arab states, along with Turkey, have provided weapons and materiel to rebel groups in Syria. The governments of majority-Shia Iran and Iraq support Assad, as does Lebanon-based Hezbollah, while Sunni-majority states including Turkey, Qatar, Saudi Arabia and others staunchly support the rebels.

Turkish troops and special forces, backed by the Free Syria Army, launched in August 2016 operation “Euphrates Shield” against ISIL to liberate the strategic Syrian city of Jarablus on the border with Turkey and stop the advance of Kurdish militia fighters. Turkey’s government fears its large native Kurdish population may grow more restive and demand greater autonomy as a result.

Since the Free Syrian Army formed in 2011, many new rebel groups have joined the fighting in Syria, including ISIL, Jabhat Fateh al-Sham, Iran-backed Hezbollah, and the Syrian Democratic Forces (SDF) dominated by the Kurdish People’s Protection Units (YPG).

EXPLAINED: Hezbollah, from Israel to Syria

The FSA has weakened as the war has progressed, while explicitly Islamist groups such as the al-Nusra Front became empowered. al-Nusra Front leader, Abu Mohammed al-Joulani, announced in 2016 his group’s name changed to Jabhat Fateh al-Sham, or The Front for liberation of al-Sham, and severed ties with al-Qaeda.

ISIL emerged in northern and eastern Syria in 2013 after overrunning large portions of Iraq. The group quickly gained international notoriety for its brutal executions and its energetic use of social media. The ranks of ISIL include a sizeable number of fightersfrom around the world.

Kurdish groups in northern Syria are also seeking self-rule in areas under their control.

Lebanese members of Hezbollah are fighting on the side of Assad, as are Iranian and Afghan fighters.

In December 2016, the Syrian army announced that Aleppo has been fully recapturedfrom rebel fighters, the government’s biggest victory in the nearly six-year civil war.

Syrian government forces used chemical weapons in rebel-held areas of Aleppo during the final weeks of the battle to retake the key city, killing at least nine people and wounding hundreds more, according to Human Rights Watch.

Since Assad’s forces recaptured Aleppo, a new military alliance of rebel groups in northern Syria was formed with the aim to consolidate military control over Idlib province, the western part of Aleppo province and parts of Latakia province, according to an FSA commander.

Whereas several rounds of peace talks have failed to stop the fighting, the Syrian government and the opposition groups have agreed to 12 evacuations. Evacuation deals allow opposition fighters to safely leave government-besieged cities and towns for areas under opposition control in Northern Syria.

Rebel groups have jockeyed for power, and frequently fight one another. Fighting has occasionally spilled over from Syria into Lebanon, contributing to the country’s political polarisation. 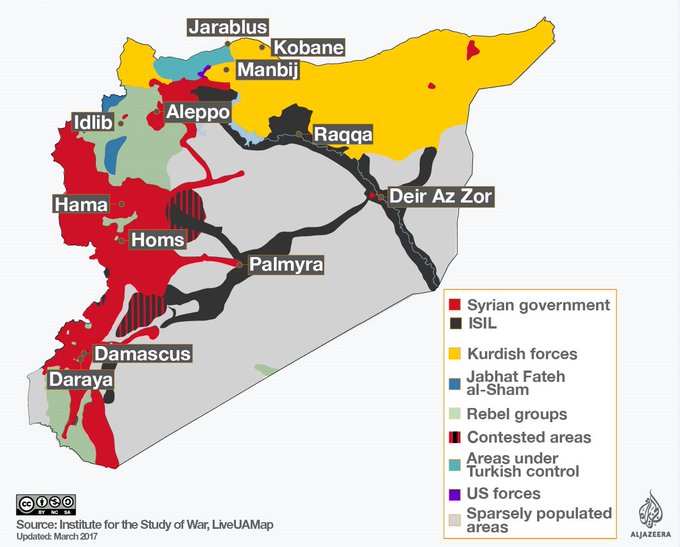 A suspected chemical attack that killed at least 80 civilians in the Idlib opposition-held town of Khan Sheikhoun is being investigated by the UN as a potential war crime, while Bashar al-Assad said it was a “fabrication” to justify US military intervention.

Despite that 1,300 tonnes of sarin nerve gas and its precursors were removed from Syria, chemical weapons have been a recurring footnote in the bloody narrative of Syria’s civil war.

In the latest evacuation deal between the rebels and the goverment, over a 110 people were killed in an attack targetting the evacuation convoys from the rebel-besieged towns of Foua and Kefraya in Idlib.

In March, an alliance of US-backed fighters said it has begun a new phase of its campaign on the ISIL-held city of Raqqa in northern Syria, aiming to complete its encirclement and sever the road to the group’s strongholds in Deir Az Zor province.

Also in March, fighting in and around Damascus has intensified after surprise attacks by rebel fighters in the northeastern parts of the city. The United Nations said fighting around Syria’s capital has cut off 300,000 people from humanitarian assistance and pauses in the conflict are needed to allow aid convoys to get to the area.

In addition to Aleppo, the Syrian government currently controls the capital, Damascus, parts of southern Syria and Deir Az Zor, much of the area near the Syrian-Lebanese border, and the northwestern coastal region. Rebel groups, ISIL, and Kurdish forces control the rest of the country.

The Syrian war is creating profound effects far beyond the country’s borders. Lebanon, Turkey, and Jordan are now housing large and growing numbers of Syrian refugees, many of whom have attempted to journey onwards to Europe in search of better conditions.

With much of Syria in ruins, millions of Syrians having fled abroad, and a population deeply traumatised by war, one thing is certain: Rebuilding Syria after the war ends will be a lengthy, extremely difficult process. 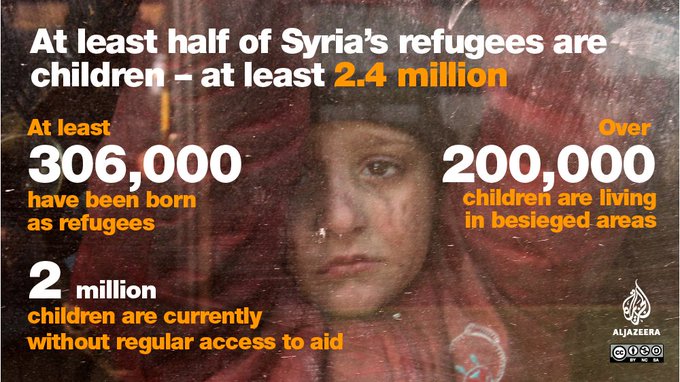 What the Bible says on Blasphemy – Lucas Bashir

INTRODUCTION WITHOUT 'AQD: A LEGALIZATION OF FORNICATION (Part 3)

PALESTINE : THE PAST AND PRESENT