Recently, I was at a local park with my daughters, attempting to follow their exuberant patterns as they capered joyfully from swing to slide to monkey bars. After several minutes, I became aware of an elderly couple nearby.   Apparently they were observing me and my children with interest. The man had a long, bushy grey beard, and the woman was wearing an abaya and a headscarf. I walked over and offered my salaams and a smile.

They returned the greeting a bit hesitantly, and then the man asked me, with accented English,  “Are you a Muslim?”

“But where are you from?”

“From here, the United States,” I answered.

“Do you speak Arabic?”

“But you’re a Muslim?” he pressed on.

“Yes,” I answered, again.  I had to try a little harder to maintain the smile on my face.

“Ah, your husband is a Muslim,” he surmised, with the air of Sherlock Holmes making a brilliant deduction.

At this point I realized I had, once again, stepped unwillingly into the Convert Zone:  that bizarre realm where those of us who have chosen to embrace Islam at some point in our adult lives are subject to dozens of indelicate questions and unfair assumptions made by those who were born into a Muslim family.

For some reason, converts are sometimes treated like rare specimens in a zoo by our brothers and sisters in Islam.  We are scrutinized, questioned, analyzed, doubted, and patronized.  The interrogations we endure might be circumspect, but they all pose the same fundamental questions at their core:   Are you really Muslim?  Do you know “enough” to be Muslim?  Are you sincere?  Can someone who looks like you really be a believer?  Are you one of us, or one of them?

“Maybe the elderly couple was just surprised to see a white American Muslim,” some people might argue.  “Perhaps they hadn’t met one before and weren’t sure if you were genuine.  They’re probably just curious.  They might actually be very happy for you.  Why get defensive?”

Let’s break it all down:

1- I am not a unicorn. Yes, white American Muslims are a minority, but we are not rare, mythical creatures. There are thousands of us.

2- Even though I happen to be caucasian, my Muslim identity is immediately obvious to everyone else, wherever I go in Southern California. In the land of perpetual sunshine, most of the women wear t-shirts and shorts, or sundresses, or skinny jeans. No matter the weather, I dress in loose clothes from head to toe, including a hijab. I might as well wear a neon sign that says, “Muslim!”

3- I greeted the elderly couple with “asalaamu alaykum.” Any doubt they might have had should have been dispelled with that greeting.  So, why did the brother still feel the need to ask me three times if I was a Muslim?!

4- People who are just curious and/or happy for you do not act suspicious or condescending.

Sadly, the park interaction was not a first.  This scenario has played out in various ways over the past 17 years since I took my shahada. It is disheartening that no matter how comfortable I have become in my skin as a Muslim American, there are always some people who will remind me that I am not quite “authentic” in their eyes.  Here are some of the other squirm-inducing questions and comments I have received in the Convert Zone:

1- “Did you convert for your husband?”

Um, no. I love my husband and I would do many things for him, but I would not change my entire life, from the clothes I wear every day, to the way I interact with people, to the food I eat, to the God I worship and my preparations for the eternal fate of my soul.. .  just to make my spouse happy. 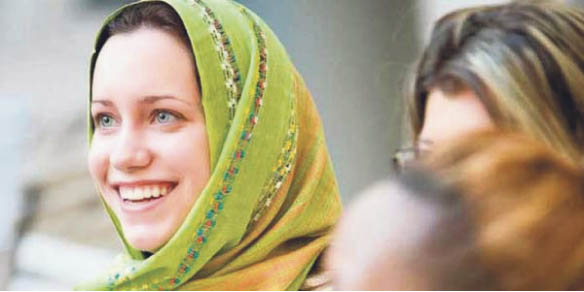 To suggest that I have transformed my thoughts and identity and inadvertently made myself an outcast in my family and my country just to please my husband is both belittling and insulting.  It implies that I have no intellect or free will. No one should ever ask a female convert this question.

And you know what else, complete stranger who asks this question?  Even if a woman did convert purely for her husband, it is really none of your business.

I have heard this unsolicited observation several times over the years, and it never fails to make me sick to my stomach.  There are so many false assumptions at its core.  First of all, the Muslims — yes, Muslims! — who have said this to me did not even know where my husband is from.  They saw my headscarf, immediately assumed that I wore it because I was married to a Muslim man, further assumed he was an Arab, and additionally assumed that he married me because of my appearance! So many misconceptions and prejudices packed into one snide remark!

Please do not objectify any woman in this way. She is much more than skin and eyes and she will not thank you for inferring that her husband’s interest in her is superficial. Also, please do not paint Muslim men as shallow, lustful collectors of Western Barbie-like spouses.

For some reason, many people feel entitled to ask very blunt questions about a convert’s ibaada that I am sure they would not ask of non-converts.  We Muslims are supposed to assume the best of each other.  We are not each other’s judges, and even if we have been Muslim for our whole lives, it does not entitle us to feel superior to a newcomer.  In fact, the hearts of brand new converts are so pure that we should all feel humbled in their presence. Their sins were recently wiped away; how numerous are ours?  Unless we are spiritual advisers who have been asked for guidance, we have no business probing each other for details of our worship.

When I was extremely new to Islam, I met a sister who was of Pakistani origin. She immediately asked me, “Do you do namaaz?’

“Namaaz?” I repeated, confused.  I had never heard of the term.

“I don’t know what that is,” I admitted, feeling embarrassed.

Unfortunately, although she was fluent in English, it did not occur to her to substitute the words “prayer,” or “salat,” which I would have recognized. More than that, though:  why did she feel the need to ask me if I prayed? She had just met me!

Perhaps her intentions were good; she wanted to make sure I was off to a good start in my practice of Islam.  In that case, simply saying, “Sister, if you need any help learning to pray, I am happy to help,” would have made all the difference.

4- “Too bad your non-Muslim family members will all be going to hell.”

Yes, that statement seems too horrible to be authentic, but it was actually one of the first things I heard after I embraced Islam. I will never forget it because it wounded and troubled me at a very impressionable and delicate time.

About two days after I took shahada, I was visiting a lovely Muslim family in our neighborhood.  My husband and I had gotten to know them over the past few months, and I had learned to admire the generous, sweet mother and her boisterous, loving children.  The whole chattering group was expressing their happiness and congratulations at the news of my conversion when the ten-year-old boy asked me, out of the blue, if my parents, siblings, and grandparents were still Christians.  When I answered in the affirmative, he said, with sincerity and sadness, “Too bad they will all be going to hell.” 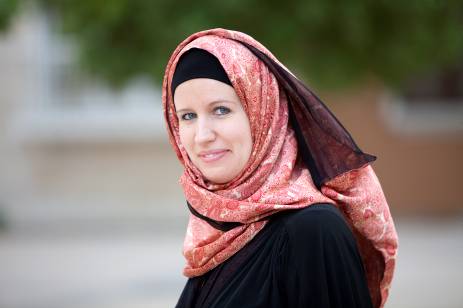 All the joy of the moment disappeared.  I looked to his mother in surprise.  Surely this was a case of a child’s misunderstanding and lack of tact?  But her eyes just filled with sadness, not embarrassment or denial.

“Yes, unfortunately, all nonbelievers will burn in hell,” she confirmed.

Talk about a buzzkill!

Whatever the scholars’ opinions are on whether Christians, Jews, or others can be admitted into Paradise– or whether perhaps they will be given the opportunity to acknowledge Allah SWT and make amends at the moment of death — there are much more diplomatic ways — an appropriate times– to discuss this topic.

My recommendation is that a convert should be knowledgeable in their deen and secure in their Muslim identity before they have to tackle such weighty issues.  Relationships with non-Muslim family members are already difficult, in many cases, for recent converts.  The drastic lifestyle changes and long list of new skills to master — like all the motions of prayer and reciting Qur’an in Arabic — can already be overwhelming to new Muslims, so they should not be burdened unnecessarily.

So, please avoid talk of converts’ relatives burning in hellfire for eternity, particularly when they are celebrating their shahada.

This question, when asked by a concerned friend, can be an opportunity for a convert to open up about any difficulties and to seek advice and solidarity.  When asked by a complete stranger, however, the query seems quite intrusive.

The majority of converts I know faced some level of resistance or animosity from family members when they embraced Islam. Some of them actually endured heartbreaking dramas that are still painful to recollect, years later. So don’t be surprised if a convert you just met is hesitant to tell you about his or her family’s reaction to The News. It might be one of the most upsetting and deeply private memories they have.

On behalf of all converts who have experienced the awkwardness of The Zone, I ask all my brothers and sisters to think before you speak.  Please do not use us and our life stories to satisfy your idle curiosity.  Keep your questions relevant and respectful and do not cross lines into private topics.  Please, especially, do not approach us with negative assumptions or gross generalizations. We deserve the same respect and consideration that all of your brothers and sisters do, and perhaps — because of the unique struggles we face as converts — even a little bit more.

Questioning the concept of Trinity

Omolewa Nafeesat bint Yakub - Wed 14 Muharram 1442AH 2-9-2020AD
0
PARENTING GOALS AND IDEAS. By Khalid Baig “O Believers! Save Yourself and Your families from a Fire whose fuel is men and stones.” This verse points...