As 16-year-old Miriam* stepped out of her tent to fetch water near the Madinatu Internally Displaced Persons (IDP) camp in Nigeria’s northeastern Borno state in January last year, a middle-aged woman she knew as “Aunty Kiki” approached her.

She asked Miriam if she was interested in moving to the city of Enugu to work as a housemaid for a monthly salary.

Miriam, who is now 17, wasted no time in accepting the offer and began to prepare for her trip to the east the following day.

She told her 17-year-old cousin, Roda*, about it and advised her to approach Aunty Kiki.

When Roda, who is now 18, met Aunty Kiki the next morning, she asked if there was a job for her, too. The woman quickly agreed, so Roda packed her bags.

“We were both very excited to travel to Enugu,” Miriam says. “We had suffered so much for four years and were happy to go somewhere new to start a new life.”

Both girls, who used to live in the same compound in Bama, fled the northeastern Nigerian town in 2017 when Boko Haram stormed the area, burning down houses and kidnapping women and children.

Miriam and Roda fled, leaving other members of their family behind. They do not know what happened to them.

The two girls trekked for several days to reach Madinatu, where they remained for nearly two years before their trip to Enugu in southeastern Nigeria.

In Madinatu, Miriam and Roda lived together in a small bamboo tent inside the camp that houses more than 5,000 people who, like them, had fled Boko Haram.

Life was tough in the camp. Food was in short supply and IDPs had to beg on the streets of the nearby town to be able to get enough to eat.

So the girls jumped at the chance of paid jobs in Enugu.

They did not have time to tell anyone they were going. 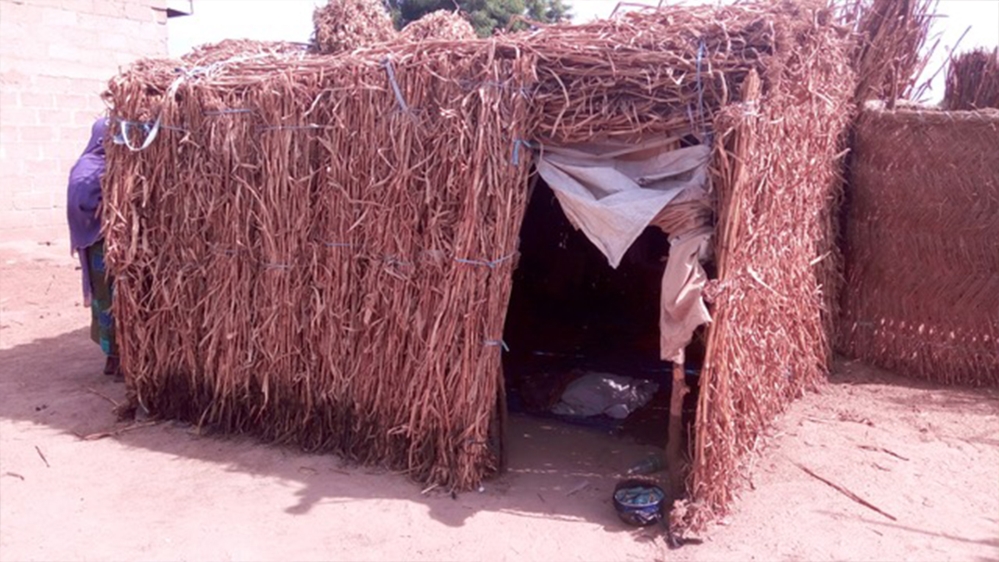 For two years, Miriam and Roda lived in a hut like this in Madinatu before they were trafficked to Enugu [Philip Obaji Jr/Al Jazeera]

First, they travelled with Aunty Kiki to Maiduguri.

Then a 12-hour journey to Abuja followed. They spent the night there in the home of a woman who knew Aunty Kiki.

The next day, after a nine-hour journey, they reached Enugu.

Aunty Kiki took them to a compound where she handed them over to an elderly woman she called “Mma” and told the girls to do whatever the woman asked of them.

“The compound had two flats of three bedrooms each, filled with young girls, some of them pregnant,” says Miriam. “Aunty Kiki said it was where we’d be working.”

At first, the girls thought their jobs were to clean the compound and do household chores as Aunty Kiki had led them to believe. Their new employers, however, had other ideas.

“Mma asked that we stay alone in separate rooms for that first night,” Miriam explains. “We were surprised because the other girls in the compound were sharing rooms, some of which had four people in them.”

Late that night, according to Miriam, a man walked into her room, ordered her to take off her clothes, held her hands tightly, and raped her.

The same thing happened to Roda, but her rapist was much more brutal.

“When I tried to scream, he covered my mouth and gave me a dirty slap,” Roda says. “If he saw tears in my eyes, he slapped me even more.”

The next day, the girls were moved to shared rooms with others, only being sent to single rooms when they were required to “work”.

Both girls say they were raped almost daily by several different men.

They believe that Mma and Aunty Kiki work together in the same trafficking cartel and that Mma is the leader of the group.

All they could make out for sure, however, was that the two women communicated with each other and the men in Igbo, the language spoken in southeastern Nigeria. 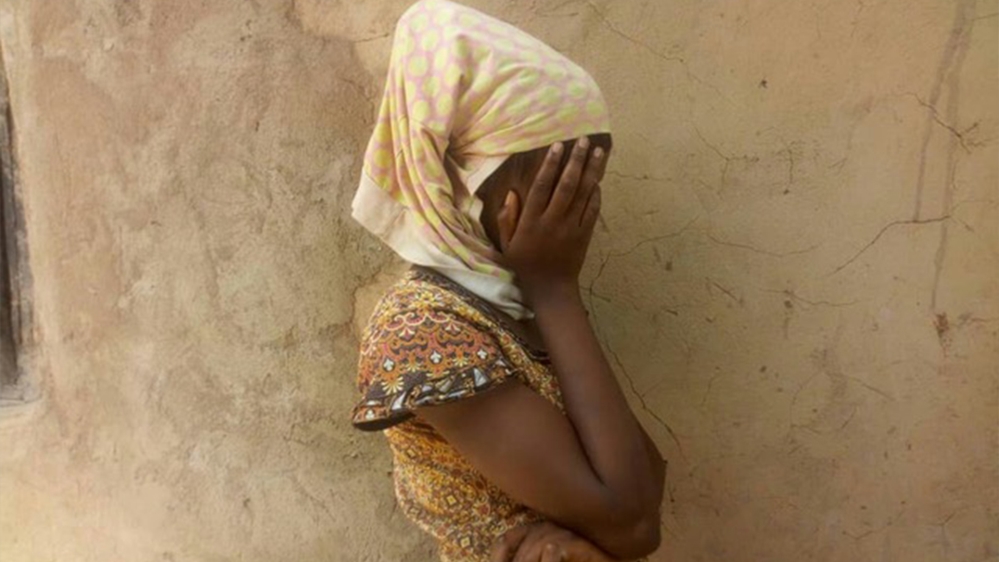 “It doesn’t matter whether you are six weeks or six months pregnant,” says Roda. “If any of the men wants you, you can’t say no.”

It was pointless trying to escape, they explain, because the compound was guarded by men with guns.

Around a dozen girls were living in the compound when Miriam and Roda first arrived. But the number would change as the girls gave birth and were sent away, before new girls were brought in to produce more children for the cartel.

Miriam gave birth to a baby boy in the compound, with the assistance of a midwife who was called in from outside. But her son was taken from her.

Three days later, she was blindfolded and taken to a bus station where her traffickers made sure she boarded a vehicle back to the north.

“They didn’t want me to know the way to the compound, that’s why they covered my face,” she explains. “I was given 20,000 naira (about $55) to assist in my transportation to my destination.”

She first went to Abuja where she spent a night on the street before boarding a commercial vehicle back to Maiduguri.

Miriam does not know how much her baby was sold for.

“Some traffickers let their victims leave after giving birth because they believe if girls stay for too long, they could develop a plan to expose the trade,” explains Abang Robert, public relations head of Caprecon Development and Peace Initiative, an NGO focused on rehabilitating victims of human trafficking in Nigeria. “They are scared of sabotage.”

Baby factories are more common in the southeastern part of Nigeria, where security operatives have carried out several raids, including an operation last year when 19 pregnant girls and four children were rescued.

Women and girls are held captive to deliver babies who are then sold illegally to adoptive parents, forced into child labour, trafficked into prostitution or, as several reports suggest, ritually killed.

“Boys are more expensive than girls in the baby sale business,” says Comfort Agboko, head of the southeastern arm of Nigeria’s anti-trafficking agency, the National Agency for the Prohibition of Trafficking in Persons (NAPTIP), at her office in Enugu.

The majority of the buyers are couples who have been unable to conceive.

Although anyone caught buying, selling or otherwise dealing in the procurement of children can be prosecuted, the baby trade remains prevalent in Enugu. 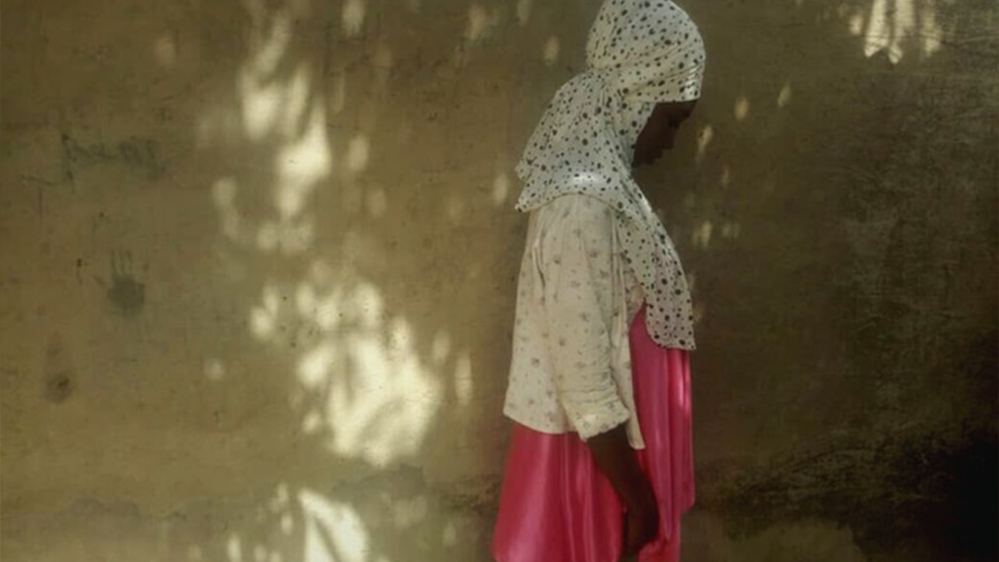 To avoid suspicion in the local community, baby factories are often presented as orphanages, experts explain.

“Baby factory operators hide under the ‘canopy’ of orphanages,” says Agboko. She believes people receiving babies from them either do not know or do not care that they are not really orphans.

NAPTIP has arrested and prosecuted a number of people involved in the sale of babies in the southeast in recent years, Agboko explains. There are currently around half a dozen cases going through the court system.

“We are now working in collaboration with the association of orphanage homes operators in the entire southeast to identify, arrest and prosecute such people,” she adds.

Like Miriam, Roda was also discarded after she gave birth to a boy.

The cousins were reunited in Madinatu, where they are now living together in a small mud house, not far from the camp they were trafficked from.

“Luckily, we got to Madinatu on the same day,” says Miriam, who spent weeks on the streets of Abuja, before she was able to make her way back to the northeast.

“We thought it was no longer safe to stay in the camp, so talked to the man who owns this place to let us stay here.”

To earn money, the girls now make and sell groundnut cakes at a mini kiosk just outside their compound.

They were not the first to be trafficked from the Madinatu camp. There have been many reports of girls being trafficked from the camp to cities in Nigeria and to countries including Italy, Libya, Niger and Saudi Arabia. The victims are often promised good jobs only to end up being exploited or enslaved.

Although widespread in Madinatu, the problem of human trafficking is not peculiar to this area alone. It is common across the entire northeast region.

The 2019 United States Department of State Trafficking in Persons report revealed that: “Sexual exploitation, including sex trafficking of IDPs (internationally displaced persons) in camps, settlements, and host communities around Maiduguri remained a pervasive problem.” The report also notes that some security officials are complicit in these activities.

NAPTIP says it is aware of high numbers of cases of human trafficking in Madinatu and is increasing efforts to address the issue in the IDP camp in particular.

“The office has now increased surveillance in the IDP camp,” Mikita Ali, head of the NAPTIP office covering the northeast region, says. “We are working with camp managers and camp officials to whom we’ve given our toll-free numbers and told to call us if they suspect any case of human trafficking.” 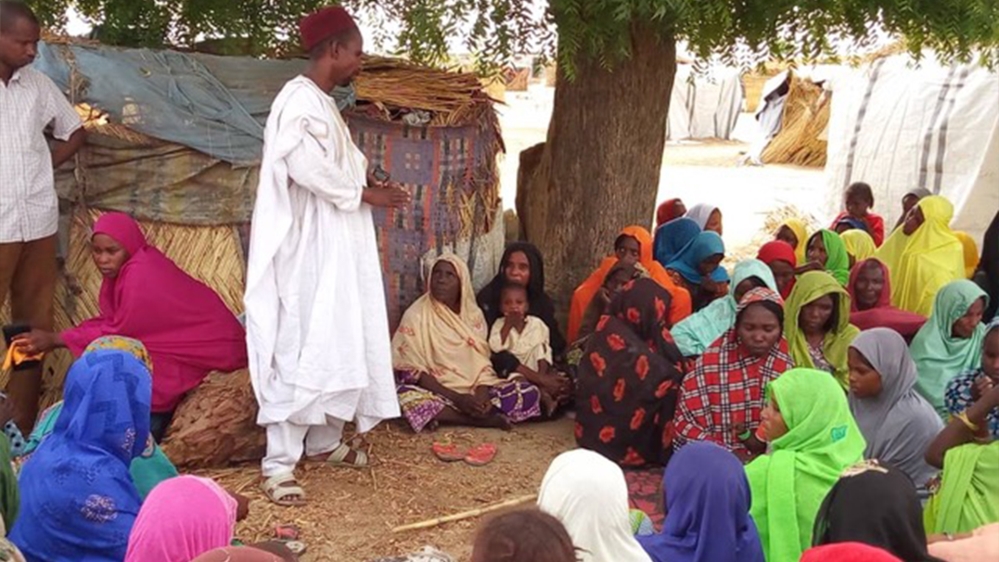 Inside the Madinatu camp, however, residents remain worried about the number of cases. Community leaders say the lack of adequate amenities like potable water facilities and cooking stoves means that people have to walk long distances in search of water and firewood, making them vulnerable to the human traffickers who prey on them.

“If we had easy access to water and firewood, there’d be little talk of human trafficking,” says Mohammed Lawan Tuba, a community leader in Madinatu. “Criminals take advantage of our children when they go out to find what they need to keep them and their families alive.”

Human rights campaigners are running “sensitisation campaigns” which aim to educate displaced persons about the dangers of human trafficking and how to spot the signs of it inside the IDP camp.

But Yusuf Chiroma, head of the Borno Community Coalition, a group of aid workers assisting survivors of the Boko Haram insurgency through skills acquisition programmes, says: “Displaced persons in Madinatu are really struggling to survive, as they are not getting enough food supply from the government and that is why it is easy for traffickers to exploit those who are desperate for jobs.”

“Sensitisation programmes have to be matched with adequate security and availability of food and social services by the state government to effectively tackle human trafficking.”

This article belongs exclusively to Aljazeera News and Agencies and written by Philip Obaji Jr.

Jerusalem: Will The Muslim World Unite To Protect Al-Quds? By Rasheed Abubakar

Trump seeks to win over Muslims with Islam speech